The SERVIR project is a joint effort between NASA and the US Agency for International Development (USAID) to build capacity in developing regions to use Earth observation data and models to help in several thematic areas relies on effective methods and applications to process large volumes of data and deliver results to users in ways they can easily incorporate in decision-making processes. USRA contributes to SERVIR by leading the Geospatial Information Technology (GIT) community of practice across the global SERVIR network. Software engineers based at USRA/STI in Huntsville, participate as members of SERVIR’s Science Coordination Office (SCO), to co-develop software solutions along with scientists and engineers from the regional SERVIR hubs, and from several research centers throughout the USA and with global partners such as the United Nations’ Food and Agriculture Organization (UN/FAO).

The team also promotes the adoption of development technologies and platforms that allow the hubs to deliver applications faster and more effectively to their user communities. This includes leading the adoption of cloud computing and engaging potential technological partners from the private sector. USRA’s GIT Team is also responsible for knowledge management on GIT topics through the entire SERVIR network.

The NASA Short-term Prediction Research and Transition (SPoRT) center is a project to transition unique observations and research capabilities to the operational weather community to improve short-term forecasts on a regional scale.

Dr. Blankenship leads an effort for SPoRT to improve a land surface model by data assimilation of soil moisture from the NASA Soil Moisture Active Passive (SMAP) satellite mission. The SMAP observations are assimilated into the Noah land surface model within the NASA Land Information System. A new non-localized bias correction has been developed which allows the satellite observations to influence the model climatology of soil moisture, making it possible to correct errors in soil moisture fields due to biases in the forcing precipitation data. Over the CONUS, validation against soil moisture probes shows improvement in correlations over the eastern US, but degradation over much of the southwestern US and west coast.

Additionally, SMAP impact on numerical weather prediction is being tested by using soil moisture fields from the LIS model (with and without SMAP data assimilation) to assimilate a 48-hour numerical weather forecast in the Weather Research and Forecasting (WRF) model. Individual test cases demonstrate that SMAP can improve the timing and structure of certain severe storm events. A more systematic assessment is ongoing to evaluate the impact of SMAP daily forecasts over the summer months for different regions of the US.

The Interagency Implementation and Advanced Concepts Team (IMPACT) is a collaborative research group that works to maximize the scientific return of NASA's Earth Science missions. IMPACT builds partnerships with other Federal agencies, the applications community, decision makers, NGOs, and other organizations to encourage the adoption of NASA data into their workflows and operational models. It enhances NASA’s existing data infrastructure, tools and services to encourage broader use of NASA’s data for all users and enables technology and innovation in order to lower the barriers to using complex Earth observation data. The IMPACT team is committed to collaborative, innovative, and agile solutions for all. 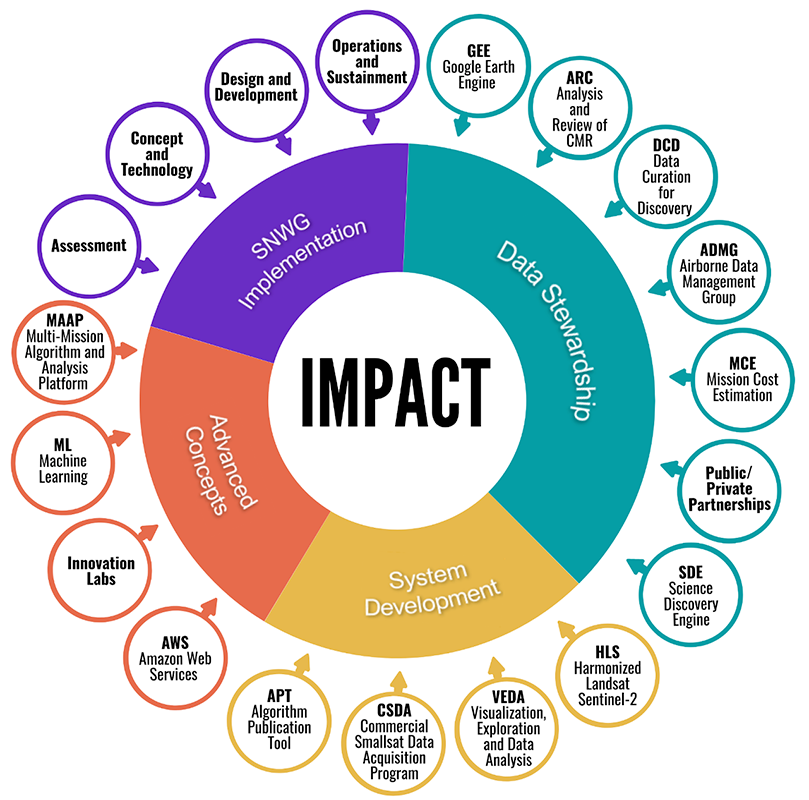 Dr. Mohammad Al-Hamdan is working with co-investigators from San Jose State University and University of California-Riverside, and stakeholders from California Air Resource Board, Bay Area Air Quality Management District, and South Coast Air Quality Management District on a NASA-funded project, whose goal is to use satellite-derived PM2.5 dataset to assist air pollution management in California. Dr. Al-Hamdan has developed and applied a novel method to combine data from NASA satellites and ground monitors to provide daily estimates of PM2.5. This method has been demonstrated for days prior to, during and after the Northern California Wildfires Outbreak of October 9-15, 2017. This project is funded by the NASA Health and Air Quality Applied Sciences Team (HAQAST) Program.

Figure caption. Model output from combined NASA satellites for before, during, and after a California wildfire outbreak.

GLM is an instrument on The Geostationary Operational Environmental Satellite R-series (GOES-R).  GOES-R is a joint development between NASA and NOAA, with NASA responsible for the spacecraft and instruments and NOAA responsible for the overall program and ground segment.  GOES-R, now GOES-16, was launched 19 November 2016, 23:42 UTC. GOES-S, now GOES-17, was launched 1 March 2018, 22:02 UTC.

The GLM maps total lightning activity continuously day and night with near-uniform storm scale spatial resolution of 8 km over the Americas and adjacent oceanic regions in the western hemisphere.  The data from GLM aids in the forecasting of severe storms, tornadoes, and convective weather, and also increases aviation safety and efficiency.  The Americas are indeed notable for their intense thunderstorms and lightning from tornado alley in the Southern Great Plains of the U.S. to the almost daily thunderstorms (>300 days per year) over Lake Maracaibo, to the extreme flash rates (>1000 fl min−1) associated with mesoscale convective systems in the La Plata Basin. 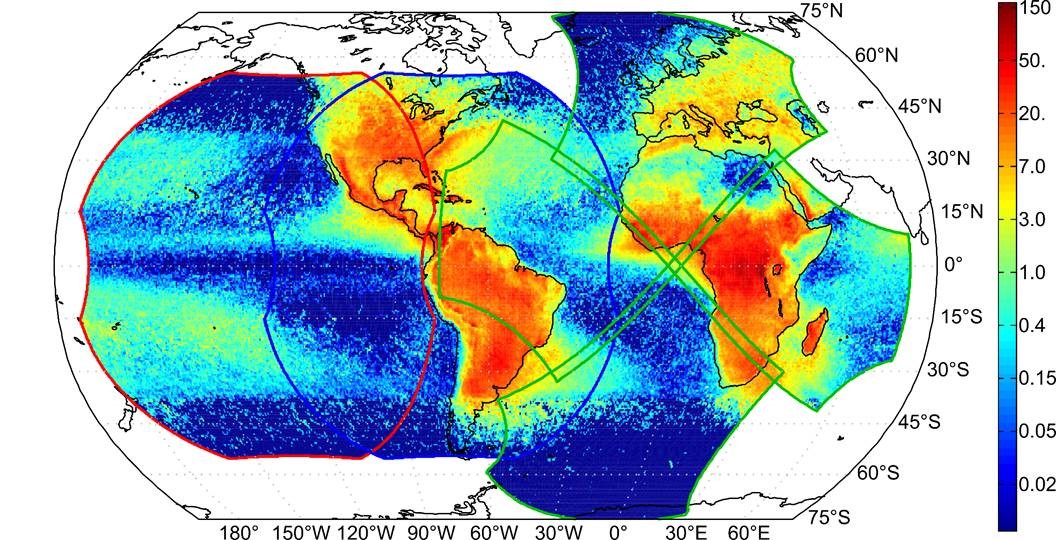 Figure:  Image of the Field of View of the two GLM instruments (on GOES-16 and GOES-17) along with the field of view of the Lightning Imager (LI) that the Europeans will be launching in 2022 (on the Meteosat Third Generation Imager, MTG-I satellite).   The outlines show (from left to right) the GLM on GOES-17 (GOES West, red), the GLM on GOES-16 (GOES East, blue), and the European LI on MTG-I (green). The color maps inside the FOV are the lightning density based on the TRMM-LIS (Tropical Rainfall Measuring Mission Lightning Imaging Sensor) and OTD (Optical Transient Detector) data from 1995-2015.