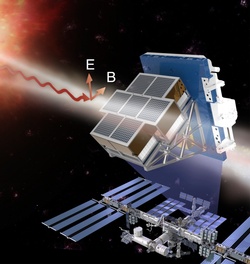 LEAP - A LargE Area burst Polarimeter - was selected for a 9 month mission concept study by the NASA Science Mission Directorate.  It is one of two Astrophysics Mission of Opportunity proposals to be selected for additional study.  LEAP mission would be an instrument mounted as an external payload to the the International Space Station, and its primary mission would be to study the polarization of gamma rays from gamma-ray bursts (GRBs).  GRBs are the most energetic explosions in the universe and are highly-relativistic jets of material ejected from the core-collapse of massive stars or when two neutron stars collide.  An instrument capable of measuring the polarization of the GRB radiation has been long-desired in the community, since it could answer several open questions about the jet physics and the underlying processes that produce the jets.  Specifically, measuring the polarization could tell us about the magnetic field strengths present in these systems during core-collapse or collision; it could tell us if the jet itself mostly contains matter moving at very near the speed of light or contains a lot of radiation; and it could also indicate how the matter in the jet is converted to the gamma-rays that we observe.

The LEAP instrument is composed of gamma-ray scintillators coupled to photo-multiplier tubes, together creating detectors that owe heritage to both the current Fermi Gamma-ray Burst Monitor (GBM) and the previous Burst and Transient Source Experiment (BATSE) onboard the Compton Gamma-ray Observatory. Different from GBM and BATSE, however, is the unique arrangement of the detectors that will allow LEAP to measure the polarization of the gamma-rays that neither of the previous instrument had the capability to observe.  Additionally, its very large observing area, several times that of GBM, will make it sensitive to detecting many GRBs, so GRB polarization could be measured for potentially hundreds of GRBs, allowing for a population analysis.

LEAP is led by PI Mark McConnell at the University of New Hampshire, and the concept study is being managed by NASA Marshall Space Flight Center.  USRA, in partnership with MSFC, will take part in the awarded concept study to produce a final report on the ability of LEAP to achieve its proposed science.  It is expected that in 2021, NASA will perform a downselect of the 4 mission concepts, and if LEAP is one of the missions chosen, it will be built and is expected to be operational on the ISS in ~2025.  Dr. Adam Goldstein, of USRA's Science and Technology Institute in Huntsville, AL is one of the Co-I's on this Mission of Opportunity.