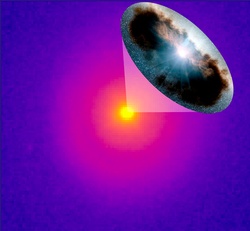 In a paper published in the Astrophysical Journal, scientists, including Dr. Chien-Ting Chen and Dr. Doug Swartz, describe the discovery of an intermediate black hole buried in gas and dust in a dwarf galaxy. The discovery of the dust-obscured black hole of a previously undiscovered size is exciting since it may help provide clues about how such black holes were seeded in the very early universe.

Using NASA's NuSTAR observatory to study a black hole containing 160,000 times the mass of the Sun in the center of the dwarf galaxy J144013+024744, Universities Space Research Association’s Dr. Chien-Ting Chen, who is the Principal Investigator, and Shrey Ansh, the lead author and graduate student at University of Alabama in Huntsville, found the black hole to be deeply buried by the gas and dust in the galaxy.

Or read the article!!