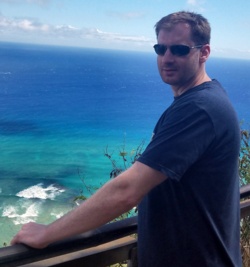 Adam Goldstein was raised in a small town in southwestern Missouri. He completed a B.S. in Physics with Honors at the University of Arkansas in 2007, writing and defending an Honors Thesis on the transverse profile and polarization properties of Ince-Gaussian Lasers. Adam received a M.S. in Physics in 2010 and a Ph.D. in Physics in 2012, both from the University of Alabama in Huntsville. His doctoral research focused on utilizing the observed properties of long duration gamma-ray bursts (GRBs) to place constraints on cosmological models.

In 2008, shortly after launch of the Fermi Gamma-ray Space Telescope, Adam joined the Fermi Gamma-ray Burst Monitor (GBM) team as a graduate research assistant, and he has continued as a member of GBM after graduation, first as a NASA Postdoctoral Fellow and now as a research scientist with USRA. Adam has contributed to GBM daily operations and improvement of science operations, including implementing an improved near-realtime automated localization of GRB triggers and maintaining and updating the science tools used by GBM to analyze GRBs and other phenomena GBM observes.

In addition to helping improve the GBM science deliverables to the public, Adam is also a key member in the GBM effort to search for GRBs coincident with gravitational-wave signals detected by LIGO and Virgo. He is a primary contributor to an offline targeted sub-threshold search for GRBs coincident with multimessenger events and also contributes to the GBM blind search for sub-threshold short GRBs. Adam localized on the sky the first GRB to be jointly detected in gravitational waves by LIGO, providing the first confirming evidence that the two detections were associated. He led the GBM Team publication on the detection and analysis of this gamma-ray burst, GRB 170817A. As a result of this detection and publication, the GBM Team was awarded a NASA Spaceflight Awareness Award and the Bruno Rossi Prize, the top prize awarded by the American Astronomical Society in the area of High-Energy Astrophysics.