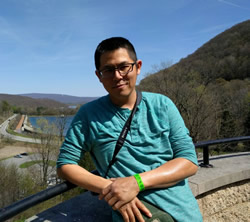 I'm an astrophysicist who studies supermassive black holes and their connection to galaxy evolution in the X-ray group of NASA's Marshall Space Flight Center in Huntsville, Alabama. Before coming to MSFC, I was a postdoctoral researcher at Pennsylvania State University. I got my Ph.D. in Physics and Astronomy from Dartmouth College after completing my undergraduate degree in National Tsing Hua University in Taiwan.

As an observer, I study distant galaxies and black holes using data from space telescopes such as Chandra, Herschel, NuSTAR, Spitzer, WISE, and XMM-Newton. I also use data from ground-based observations in the optical, near-IR, and radio wavelengths. At MSFC, I primarily work on the scientific analysis program of the ART-XC telescope onboard the Spectrum Roentgen Gamma mission that was recently launched on July 13th, 2019.