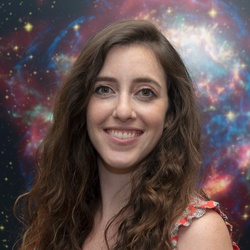 Danielle Gurgew earned her B.S. in Physics from Emory University in 2012, where her love for astronomy was born. She then went on to complete both an M.S. and Ph.D. in physics from the University of Alabama in Huntsville in 2015 and 2019 respectively, while working with the X-ray astronomy group at NASA’s Marshall Space Flight Center. Her graduate research focused on the development of thin film coatings for broadband X-ray optics with an emphasis on low-stress designs. After the completion of her Ph.D. work, Danielle joined the X-ray optics group at Goddard Space Flight Center as a NASA postdoctoral program fellow where she continued her work on the design and fabrication of multilayer coatings for future hard X-ray missions, including both balloon-borne and satellite-based telescope concepts.

Danielle joined USRA in 2022, returning to Huntsville to work with the X-ray Astronomy group at MSFC to develop and test high-angular resolution optics and corresponding reflective coatings. Her research interests center around the development of low-stress multilayer coatings with an added emphasis on how these designs can be optimized for future high-resolution, light-weight X-ray optics.