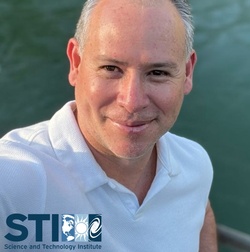 Mr. Delgado received his B.S. in Civil Engineering from the University of El Salvador in 1995, and was awarded a scholarship from the Carolina Foundation in Spain, competed amongst over 2000 candidates throughout Latin America to pursue a masters degree on Knowledge Management at the International School of Industrial Organization (EOI, Spain), completed in 2006.

In El Salvador working for the Ministry of the Environment, Mr. Delgado directed the design and implementation of two national geospatial decision support systems linking several government institutions for Environmental Management and Disaster Monitoring & Prevention, which became successful models for similar systems implemented across Central America later on. In 2006, Mr. Delgado joined the SERVIR team at the Water Center for the Humid Tropics of Latin America and The Caribbean in Panama, as Information Tecnologies and Knowledge Management Director and led the implementation of regional geospatial information systems in collaboration with NASA and USAID. As the SERVIR project expanded into Africa and Asia, Mr. Delgado joined USRA in 2003 to become the Geospatial IT Lead for the SERVIR Program at the Science Coordination Office, operating out of NASA/MSFC.